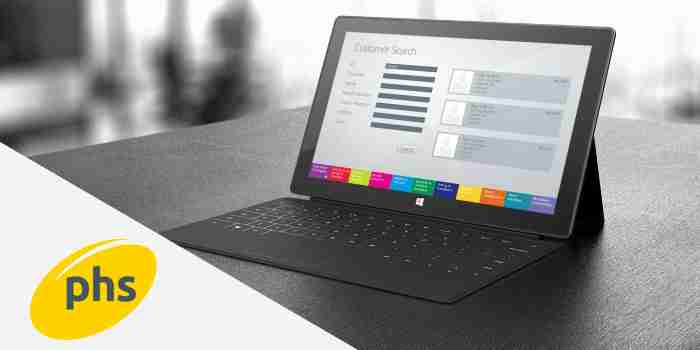 PHS are one of the UK’s leading providers of workplace services, with a remit ranging from sanitation to confidential data protection. With over 200,000 customers, managing client data and communicating effectively are both key parts of their day-to-day operations. In order to better facilitate this, their legacy Customer Relationship Management system needed a brand-new, modern interface that would operate flawlessly on new Windows 8 tablet systems.

PHS had in place an existing, legacy CRM system which had been in use for over ten years, consisting of various different elements and interfaces operating both offline and via an online web service. The existing interface for this system was built for desktop systems and later ported to tablet devices, but without a touch-screen interface or low-bandwidth optimisation for ‘out-and-about’ use, it wasn’t fit for purpose.

The required new interface would have to be able to communicate seamlessly with PHS’ existing system, as well as run on tablet systems, in use by PHS staff in client meetings. The interface had to look the part – clean, attractive and carrying the well-established PHS branding – as well as be optimised to run smoothly on low-bandwidth WiFi or a 3G internet connection.

PHS contacted Logic Software after being advised by a previous client of ours, who assured PHS of our ability to think ‘outside the box.’ Using an Agile methodology, we were also able to meet the project’s tight time constraints.

Logic Software created a ‘thin client’, communicating with PHS’ existing CRM web service and file server. As well as sporting a visual design flair which PHS staff can be proud to use around clients, the software has a wide range of features. Staff can search though lists of clients, generate automatic customer history infographics on-the-fly and create, edit and close customer callouts. Additional features include screens detailing sales and debt data, and the ability to ‘pin’ notes and attachments to client files, the latter being uploaded directly to PHS’ own file server. The interface also makes use of popular Windows 8 software features such as sidebar ‘app-snapping’.

We’ve seen an increased number of customer searches carried out in the field by staff using this software. It’s popular among staff, and the ease of use and natural flow of the software means we’ve been able to roll it out without the need for training. It can be difficult to work as a team with an external developer, but with Logic Software’s flexibility the project has been a great joint effort

PHS’ new CRM interface has been a big hit with their staff, who actively want to use the software as it makes their work easier by simplifying management of customer data. It’s allowed PHS to improve efficiency among their sales team by eliminating table optimisation issues with their original interface, and it’s given them a further competitive edge over competitors who are using paper-based systems to manage client data. The software is in place across the 500 tablets that are currently used by PHS sales force.